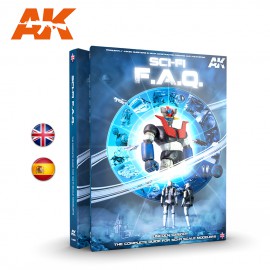 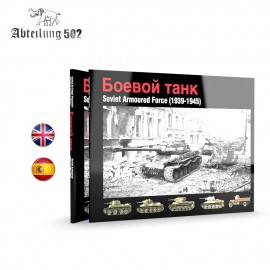 This is the first volume of the two that will feature the most iconic vehicles of the British Army in WWII. The scenes and vehicles included in this collection are shown in a compilation of step by step articles with great photographs. Perfectly combined techniques are explained to obtain maximum realism in the models. A must-have book for all fans of British WWII vehicles! 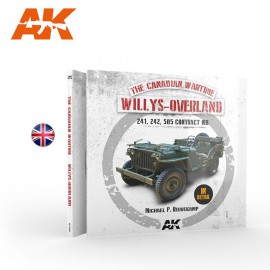 This photo manual with numerous colour photos and historical photographs, is conceived as a quick reference for modelers and restorers and those individuals interested in the more uncommon aspects of the Willys-Overland vehicle model W-LU 440-M-PERS-1, more commonly identified as the Willys MB (model version ‘B’) 1/4-ton 4X4 light utility. 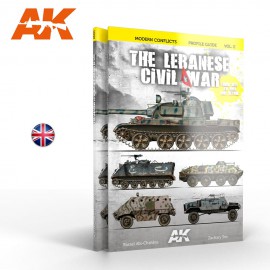 The second volume of our Modern Conflicts Profile Guide series is intended to be a handy reference source to the most interesting military vehicles and artillery pieces seen in Lebanon from the 1970s to almost present times. Inside you will find expertly researched profiles which are backed up with reference photos. If you have even a sparking interest on the subject, this book will certainly enhance your knowledge, whilst modelers will surely find it an invaluable help in building unusual models in less commonly seen liveries. 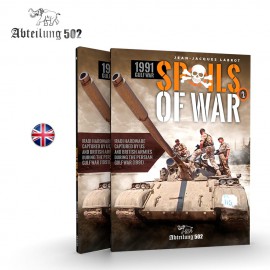 This book is the second volume devoted to the Iraqi Army’s war material captured in 1991 during the Persian Gulf War. In February 1991, the Iraqi army suffered heavy losses during the air campaign and the ground offensive launched by the coalition, but a large proportion of military hardware was simply abandoned intact in the Kuwaiti desert and captured by Allied troops. The huge booty included tanks, personnel carriers, infantry fighting vehicles, reconnaissance vehicles, self-propelled guns, self-propelled antiaircraft systems…. Before being shipped to the United States or the United Kingdom, they were gathered in the Kuwaiti Theater of Operations (KTO), or into giant junkyards located in Saudi Arabia. Spoils of War is written for the military enthusiast, modelers and historians and is the careful examination of many sources. It presents us with an overview of the huge variety of military equipment fielded by the Iraqi army. Photos were donated by veterans and other private collectors. The author was able to talk with many veterans, and interviews with those who took these photos added precious details. Both for historians fans and for the models that want new ideas and references for their models. 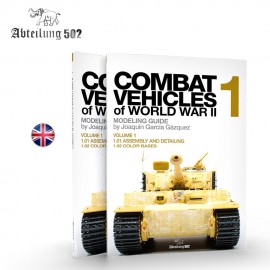 Combat Vehicles of World War II is a complete Military Vehicle Modeling Guide, where all the necessary techniques to build, paint and weather 1/35 scale models are dealt with. The work is eminently graphic, with step-by-step procedures clearly explained and detailed: materials, techniques, processes, color charts, etc. Given the breadth of the work, it has been divided into three Volumes, with the following contents: Volume 1 01 Assembly and Detailing 02 Color Bases Volume 2 03 Weathering 04 Elements and Details Volume 3 05 Step by Step Painting Examples 06 Gallery 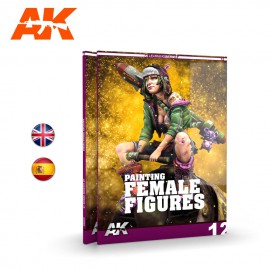 English / Spanish, 88 pages. Soft cover. The latest addition to our highly acclaimed Learning Series! The 12th issue of one of the most famous sagas in the modeling world. Discover the particular characteristics of female figure painting. Some of the best figure painters show us their tricks and techniques, in a simple way, helping you to master painting female miniatures. Get the maximum realism and beauty in each figure, whether you are a beginner or an advanced painter. This book is lavishly illustrated with step-by-step photos and descriptive text that explains, in-depth, the secrets and methods of figure painting. Within these pages you will find interesting and very useful information for your projects with figures at any scale. 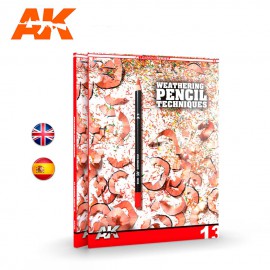 English, 96 pages. Soft cover. Discover the characteristics of weathering pencils for modeling, from their manufacture to their different uses. Some of the best artists show us how to use them, both dry and wet, with various colors and applications depending on the type of model being finished. This book is lavishly illustrated with step-by-step photos and descriptive text that explains, in-depth, the secrets and techniques of using pencils. Within these pages you will find interesting and very useful information to apply to your projects in any scale. 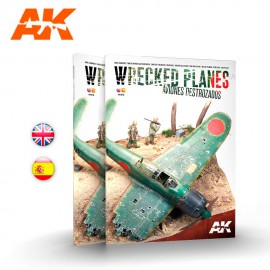 English edition. 168 pages. Semi Hard Cover. RE-EDITED EDITION! Today, Human Rights advances achieved over the past decades have been losing ground at an alarming rate. Society around the world is suffering from excessive racism, pandemics, global warming , and many other social injustices of all kinds. The Universal Declaration of Human Rights proclaimed by the United Nations in 1948 shortly after the second world war was a major milestone in the history of the world. It was the first time since the beginning of humanity that the world came to together and recognised the inherent dignity and the equal and inalienable rights of all members of the human race to a foundation of freedom, justice and peace in the world. Over seventy years later with so much discord in the world we must ask ourselves whether the vision of a free and fair world the founders of the charter imagined are any closer to being achieved then they were all those years ago. And so it is with a sense of purpose that AK Interactive have launched the most provocative and compelling modelling book ever to be published. A book that we are convinced will stand out as a beacon of hope, pushing the boundaries of artistic expression in the modelling art form. Condemnation by AK Interactive elevates modelling into an art form that makes a statement to the world by highlighting the social injustices in the world today and reminds the world of the torrid history of terrible events when humanity got it so wrong. In this book you will find very sensitive dioramas, created by some of the most expressive modelling artists in the world today. Intended as a social criticism but created from our deepest respect to the topics discussed. It is the first publication rated for those over 18 years of age due to the sensitivity of its content. The work has been very difficult. The results, can be judged by yourself. All of us, the ones who have participated in this book are very proud of having worked on it, the results and the sense of belonging of this unstoppable team of people. 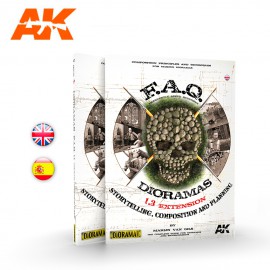 This annex 1.3 complement the book series of Dioramas FAQ and explores every aspect of diorama design and planning. What makes a good story and how can you get it across with models? Where can you find a good idea and how can you develop that idea into a successful project? How can you compose a diorama so that it tells its story best and looks good at the same time? How can you use colors, figures, accessories, scenery and bases effectively in your composition? How do you turn a historical photograph into a three dimensional scene? How do you plan a box diorama? This seemingly theoretical subject is treated in the most practical way, making it accessible and useful for every modeler. All topics are clearly explained with concrete examples, drawings, photographs and step-bysteps. 528 illustrations contain over 300 AFV, aircraft, ship, car, SF and figure models and dioramas by Van Gills, one of the world’s best modelers ever. 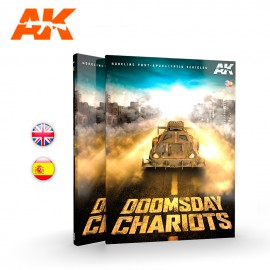 In the middle of nowhere, in the middle of a civil and science fiction genre, this book discovers some aspects of the assembly and decoration of scale vehicles with post apocalyptic aesthetics. Deeply inspired by movies like Mad Max and a punk trend, each of the machines you’ll find in this book is the extension of their drivers’ personality, created to sow panic at those unlucky enough to cross their path. A book to enjoy pure modeling. Contents: – Burn! Baby, Burn!. – Beetle Max. – Desert Crow. – Death Ranger. – Dog Breath. – Road to Hell. – Carmageddon shop 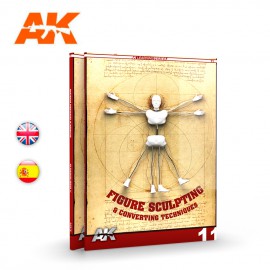 English / Spanish, 88 pages. Soft cover. The latest addition to our highly acclaimed Learning Series! The artists who have taken part in preparing this book show you all tricks and secrets involved in creation, sculpting and converting any kind of figures. Follow this essential guide composed of simple step by step processes and learn useful information that every modeler, either beginner or advanced, will find useful for his/her projects. This book is profusely illustrated with step by step photos and includes descriptive text that explains in depth the techniques of figure sculpting and transformation as well as the materials and tools involved in these processes. This is another essential volume from our Learning Series range, which has already become a classic within the history of modeling. 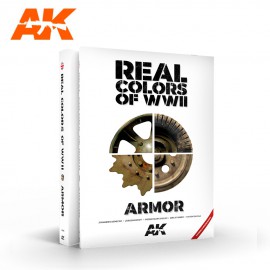 English. 228 pages. Hard Cover. Limited Edition. This publication is an updated and extended edition of our book Real Colors of WWII released in 2017. It describes the camouflage development and colors of the German, Soviet, US and British army vehicles during WWII. The team of authors has been expanded: renowned German researcher Johannes Denecke is responsible for the revision of the German chapter. The Soviet and British chapters have also been updated by Przemyslaw Skulski and Mike Starmer, respectively. Real Colors of WWII Armor has a total of 228 pages and is profusely illustrated with 244 archive photos (inc. 54 in original color), 50 modern photographs of preserved artifacts, numerous color chips, several reproductions of original color samples, camouflage drawings and other documents, and 43 colour profiles of which more than half has been specially commissioned for this edition. This is the new definitive guide on the WWII AFV colors for the modellers, wargamers and armchair historians. 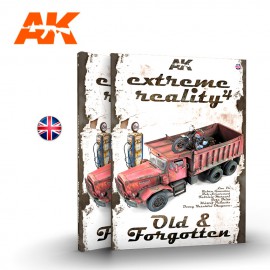 Realism is the ultimate goal that every modeler wishes to reach. The Extreme Reality collection shows how this can be achieved in modeling. With highly inspirational and detailed step-by-step articles, the artists who participated in the creation of this book, show how models can come to life. The techniques they share are the key to achieving these realistic results regardless of the subject: from a pinball machine, through a gas pump from the mythical Route 66, to an old and rusty truck. Extreme Reality 4 is an amazing book that you will enjoy to read and that will help you to improve your skills. 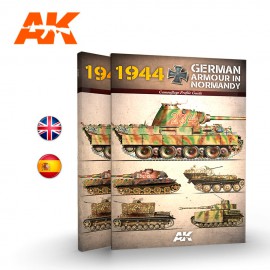 This new lavishly illustrated title in our Profile Guide series takes you on a journey through the German armoured vehicles which took part in combat in Normandy after the Allied invasion launched on June 6, 1944. Discover the plethora of different camouflage patterns depicted on 190 colour profiles, and read the informative captions which give further explanation on the colours and markings used by various units that fought with the Allies during the summer months of 1944, as well as their organization and equipment. This is an essential publication for the fans of German vehicles and an endless source of inspiration and knowledge for any modeller.